You are using an out of date browser and will experience issues on R3Owners.Net. Click Here to see options.

Our annual bike trip was supposed to take us from Toronto to Newfoundland and back. A trip estimated to be 7500km over 25 days. We were going to see some great sights, some great roads, and spend some time with my son in Halifax.

On or about day 3 of the trip I get the ever popular "Key-Fob missing" error while riding. I also get a "Check the Key-Fob Battery" message some time later. All of which came and went without any issue whatsoever. Then it got uglier...

The bike wouldn't start. Push to engage the engine and nothing. The Display Panel blinks at you with its red light (more on that later) and nothing... Then, lo and behold, it starts. Yay, we're off to the hotel. At the hotel, I grad my tools, my spare battery and I change it out. Bike starts repeatedly. I sleep well.

Next day, some breakfast, some roads of Cape Breton Island, then off to the ferry terminal to board for our 17-hour ferry from Sydney to Argentia, Newfoundland. But wait, now the bike really won't start. And by now many of you have already guessed at the solution (like I did) and you too would be wrong. The following were done repeatedly in search of a starting motorcycle while the clocked ticked down to a ferry crossing that was $1000 (for me and my wife's bike).
Called the dealership where I bought it from. They suggested the aforementioned steps above. Check. They also found a dealer closer to me. They were 1900km away, the closer dealer was only 415km away. Check. Called him. Repeat steps again. "Sorry mate, nothing we can do without getting connected to it" he said.

Rent a U-Haul in Sydney on July 28th before a long weekend in Nova Scotia. Buy some tie-down straps at the local Canadian Tire (think Sears or Pep Boys or an automotive based Walmart without the groceries). Load my R3GT and my wife's HD Heritage Classic into the back with the help of some very supportive bikers who noticed our troubles. Drove to Truro, Nova Scotia for the night's stay (because it's a long weekend and hotels are in short supply). Get up in the morning and make for APD Motorsports in Glen Haven, Nova Scotia just outside of Halifax.

So it's July 29th at this point; I get the phone call later in the day says "What's the problem? It started for me!"... He says "I updated the keyless ignition software and it's working!" to which I think great, see you in on Tuesday" But wait there's more. At or about 10am Tuesday August 3rd he calls as we're packing up our 6th night in the hotel "Seems that didn't do the trick, let me try a few other things but I likely won't get back to you until tomorrow." Okay, talk to you on tomorrow... He asks "Do you have the other key for it?" To which I reply "Yes but it's at my home in Toronto". He asks "Can you get it here?". "Sure" I said. I then call a friend who was checking the mail amongst other things for us as we were supposed to be gone almost a month, have her go into my safe and get the spare keys. She sends them priority overnight to the dealer and they arrive the next afternoon. Here's when the fun starts...

"You sent the wrong keys!" he states. "Do you have the other key-fob?". To which all the R3 owners know, you get ONE key-fob and two spare (standard) keys. He had the ONE key-fob and it wasn't doing the trick. I then asked if he had tried the "emergency method" for starting the bike with the spare key. "Not yet!" he said. An hour later, he calls back. "Bike is working with the spare key"

Great! Next day August 5th by now, we are packed up, leaving the hotel (for good this time) and off to get both bikes. He was gracious enough to store the Harley too while we were down on our luck. I started the bike with the spare key (more on it and the red light soon). We put on our rain gear, and were off home.

The RED LIGHT on the display when you click the Engine Start/Stop switch. It's doing something and I'm about to tell you what...

If you have a valid key-fob its looking for it and if it finds it, it turns on the display and you can start the bike. If it doesn't find the key-fob, it reads the sensor in the rear left panel to see if the spare is nearby. If it is detected, the display comes on, you can start the bike and all is good. It's NOT instant. There's a pause. The order of events is something like this...
So what was the problem, you ask. The KEY-FOB was the problem!!!
It seems that it is no longer capable of being paired with the ECU and as such it is as useless as brown-paper riding gloves on a rainy day. The key-fob is back-ordered like all things electronics these days; so in 6 - 8 weeks I should have a new one. I then have to take it to the dealer to have the replacement key-fob paired with the bike and hopefully that's it.

My recommendation is to wrap a spare (standard) key in some tinfoil. Put it under your seat and have it handy for when your key-fob dies (either outright or from a battery failure).

Hope this helps people in the future. If you have any questions, I'll do my best to answer them. 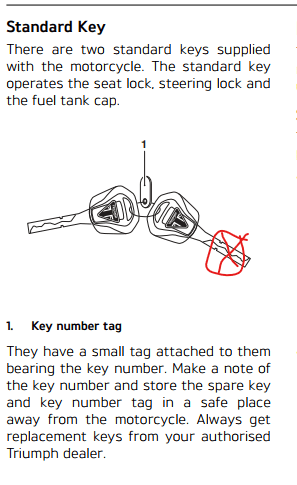 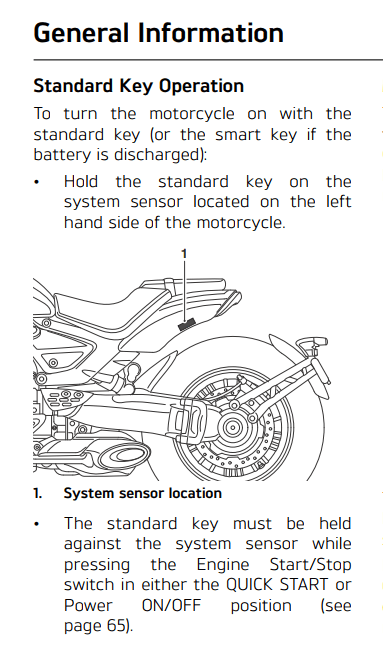 P.S. The trip was still 4100km, I still got to spend time with my son in Halifax, and I still have the rest of the season to enjoy the bike. Silver linings.
Last edited: Aug 10, 2021

Great information and thanks. I tried starting the bike with the key only and it took around 5 to 7 minutes because it appears I was holding the wrong end. Not a fan of the Fob at all! Thanks again.

thank you! printing it and storing it together with one of the two spare keys wrapped in tin foil right now in the motorcycle jacket. good advice, glad you are riding, but this spare parts things is becoming a drag

For the past few months, since yall have been having some troubles with the fob, I carry the standard key with it in the same key loop, just in case the fob decides to die.

@technoguppy I am glad you found the silver lining at the end by being able to see your son.
And that you will get a new fob. I do remember how much grief you gave me on my ride report for the R and GT and the fact I did not appreciate all the techno stuff on the newer bikes. I am happy that you have a back up plan that others can use if they find themselves in the same situation. Your story board is quite good too. As a T&E guy, I appreciate your time and analysis of the issue and imparting your experience here. Thanks.

I'm now going to attach a spare key to my fob that never leaves my side. Thanks for the heads up. I'm about to embark on a zigzag trip in the US from AZ to KY so this could very well happen to me.

Im sorry you had to go thru all this pain in order to help us all...glad youre all g now and message received thanx...i'm sure you have helped quite a few riders...thanx brutha.

...just a thought in regard to this...if the key fob was lost and not just have a batt flattery!....and you had your spare key under the seat wrapped in tin foil...how do you lift the seat to retrieve it.??..i think mine will be in tinfoil...in my jacket.

I feel your frustration, you had so much trouble just because of a malfunctioning smart key... Of course it happens on your long trip and not around town... I wish the smart key system was optional - personally I don't like it and don't need it.

If I understand this correctly it was not only the wireless operation that failed, but also using the smart key just like a standard key to start the bike. Perhaps the first case of a "totally dead smart key" for the Rocket? I don't recall another case on this forum (but admittedly I don't read everything).

Tal said:
...just a thought in regard to this...if the key fob was lost and not just have a batt flattery!....and you had your spare key under the seat wrapped in tin foil...how do you lift the seat to retrieve it.??..i think mine will be in tinfoil...in my jacket.
Click to expand...

This solution isn't in support of a lost key so you may have missed the point of my post. For that problem (and not a failed key-fob) you'd likely have to retrieve the standard/spare key from another safe place as suggested in the owner's manual. But in the seemingly likely event that your key-fob (aka Smart Key) fails on you for any reason, you can still use the key to open the seat, get the spare key, unwrap it from the tinfoil (as suggested), and be on your way.